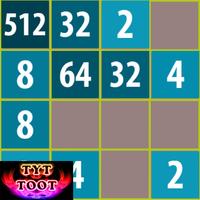 iPad
More Screenshots for iPad
2048 2 Description
2048 2 is an actractive game, a best choice to relax.

2048 is a single-player puzzle game created in March 2014 by 19-year-old Italian web developer Gabriele Cirulli, in which the objective is to slide numbered tiles on a grid to combine them and create a tile with the number 2048. Cirulli created the game in a single weekend as a test to see if he could program a game from scratch, and was surprised when his game received over 4 million visitors in less than a week, especially since it was just a weekend project. "It was a way to pass the time", he said. The game is free to play, Cirulli having said that he was unwilling to make money from "something that [he] didn’t invent".

2048 became a viral hit. The game has been described by the Wall Street Journal as "almost like Candy Crush for math geeks". Due to the popularity of 2048, rather than the other way around.

The fact that the game runs on open-source code has led to many additions to the original game, including a score leaderboard and improved touchscreen playability. Spinoffs have been released online. Cirulli sees these as "part of the beauty of open source software" and does not object to them "as long as they add new, creative modifications to the game".

2048 is played on a gray 4×4 grid, with numbered tiles that slide smoothly when a player moves them using the four arrow keys. Every turn, a new tile will randomly appear in an empty spot on the board with a value of either 2 or 4. Tiles slide as far as possible in the chosen direction until they are stopped by either another tile or the edge of the grid. If two tiles of the same number collide while moving, they will merge into a tile with the total value of the two tiles that collided. The resulting tile cannot merge with another tile again in the same move. Higher-scoring tiles emit a soft glow.

A scoreboard on the upper-right keeps track of the user's score. The user's score starts at zero, and is incremented whenever two tiles combine, by the value of the new tile. As with many arcade games, the user's best score is shown alongside the current score.

The game is won when a tile with a value of 2048 appears on the board, hence the name of the game. After reaching the 2048 tile, players can continue to play (beyond the 2048 tile) to reach higher scores. The maximum possible tile is 131,072 (or 217); the maximum possible score is 3,932,156; the maximum number of moves is 131,038. When the player has no legal moves (there are no empty spaces and no adjacent tiles with the same value), the game ends.
The simple gameplay mechanics (just four directions) allowed it to be used in a promo video for the Myo gesture control armband, the availability of the code underneath allowed it to be used as a teaching aid for programming, and the second-place winner of a coding contest at Matlab Central Exchange was an AI system that would play 2048 on its own.

If you have any questions or new ideas , please contact us by email address : tyttoot@gmail.com .

Thank you for watching .