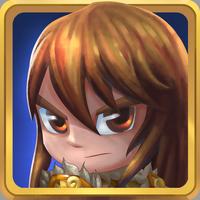 The story is based on Zhao Yun from the record of The Three Kingdoms.
This game is similar as 2048, but joined innovation and unique system as Story Mode, Endless Mode and also Special Props. You can play a different 2048 here!

No only to be general, but also more challenges are waiting for you.
Let’s try 2048 The Legend of Zhao Yun now!

The story is based on Zhao Yun from the record of The Three Kingdoms, include the begin, occasional Liu Bei and the Battle of Red Cliff, and what will be happened next?
Let’s find it out in 2048 The Legend of Zhao Yun!

2048 The Legend of Zhao Yun is vastly different from general 2048. 2048 The Legend of Zhao Yun offers innovative story mode, each level has different clearance conditions such as clear the mission in limited number of steps and collect enough soldiers. It’s allowing players to challenge higher level!
Story mode has a reinforcement system, player can pit the reinforcement soldiers directly into the battlefield in order to help player to win the game, use the reinforcement soldiers absolutely can greatly shorten the time set!

Make a Wrong step? Pressed the wrong button? Don’t be afraid! There is a item can make the battlefield back to before. Just a simply click, then it can turn back to the last step. But back in time can only be used in a closed within three times, after three time ... nothing can protect you!

2048 The Legend of Zhao Yun also have Endless mode, there is no clearance conditions within the endless mode. That it is not that experts will be able to watch 2048 rampage it? It is not! There is a bomb will randomly appear in the Endless mode, then countdown and destroy the soldiers. But the bombs can also be used to blow up the soldier who is obstacle.

The Round Table Knight's Puzzle