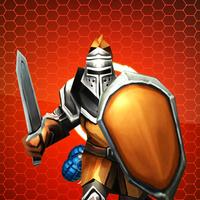 iPad
More Screenshots for iPad
Alliance For Honor Description
Alliance For Honor is a strategy game. Each hero in game has its own characteristics, different HP, different speeds, different AP, etc. Oh, forget to say, different skill, of course. You need to set up your own team. I believe that each player will have his/her own choice. Suit Is the Best. Now, What are you waiting for? Go and fight! The battle is always cruel, but at the moment you win the battle with your wisdom, all efforts are worthy. At the end of the battle, the score will be calculated by the team's performance (attention please, not by an individual hero's performance). According to the score, heroes will obtain corresponding EXP. when heroes have reached a certain level, the new levels will be unlocked and new heroes will be opened. What's the matter? Oh, that's Correct! As you guessed, it's just the time to form a new team for the next journey!