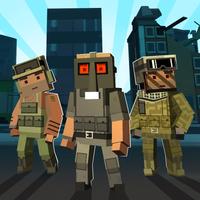 Shoot in battlegrounds of war!

Your duty today - stop your rivals’ army with the minimum of your own losses! Choose the side, pick enough soldiers and other military units, and start your conquering march!

Check two game modes: campaign mode, where you should complete missions with rising difficulty levels and defeat every army of your rivals (there are two campaigns now, “Grim Dawn” and “Rise of Justice”, but we’ll add another one soon, in future updates); and “Civil War” (skirmish) mode, where you are going to control two different armies during all fight and watch which is winning!

Remember that every unit on the battlefield has its own characteristically features, so choose wisely, think ahead and think over your strategy – the moment is precious! You can use not only ordinary soldiers, but also stormtroopers, sniper, demolishers, commandos, flamethrowers, heavy gunners, and weapon specialists! Moreover, you can use war machines - armored fighting vehicles - like light or heavy tanks, and self-propelled guns like assault gun or mortar carrier. And, of course, you can have medics – the most important infantry members in the whole military division!

Earn coins for each successfully passed battle and buy new interesting units, support actions or other power-ups for your super army! “Air Bombing” and “Artillery Attack” can inflict massive damage to your enemies, and “First aid” will heal part of your troops!