Beggar My Neighbour Not Available
Removed from the App Store 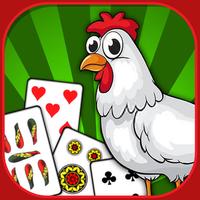 A standard 52-card deck is divided equally between two, three or four players.
The first player lays down his top card face up, and the opponent plays his top card, also face up, on it, and this goes on alternately as long as no ace or face card (King, Queen, or Jack) appears. These cards are called "penalty cards".
If you use a 40-card deck the penality card are ace, two and three.

If either player turns up such a card, his opponent has to pay a penalty: four cards for an ace, three for a King, two for a Queen, or one for a Jack.
When he has done so, the player of the penalty card wins the hand, takes all the cards in the pile and places them under his pack, however, if the second player turns up another penalty card in the course of paying to the original penalty card, his payment ceases and the first player must pay to this new card.

This changing of penalisation can continue indefinitely.
The hand is lost by the player who, in playing his penalty, turns up neither an penalty card. Then, his opponent acquires all of the cards in the pile.
When a single player has all of the cards in the deck in his stack, he has won.
Show More Show Less
Beggar My Neighbour 2.1 Update
2015-03-14 Version History
Bug Fix
More
2.1 2015-03-15
Bug Fix
1.1 2015-03-06
More Information

xQuiz Flags of the World Word