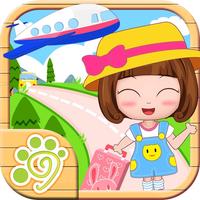 iPad
More Screenshots for iPad
Bella's travel world journey Description
"Bella travels around the world" is a kind of educational game for children. Children can visit various countries through the game. You can also know the customs of every country while visiting scenic spots.

Game features:
1.Preparing travel articles, then children will know what to prepare when traveling.

2. Dressing up, children can dress up for the characters, the game provides a lot of characteristics clothing. You can also learn local customs while playing games.

3. Visiting the scenic spots, children can choose to go to the United States, Britain, Japan, China or France for tourism, visit each country's unique architectural or landscape, vivid performance, reduction of architectural features, overlooking the beautiful scenery along the way.

4. Find the corresponding buildings, review the visited architectural attractions, test the memory of children, deepen the impression of the places.

5. Taking photos, not only visit scenic spots, but also take pictures as a memorial, as if placed in the real scene. The photos can also be shared with friends.

Now let’s go for a trip with Bella.

China, one of the four ancient civilizations, has a long history of origin and rapid modernization, and has spawned many characteristic buildings, such as the Great Wall, the Oriental Pearl Tower and so on.

The United States, the most developed country in the world, has bustling cities and the most popular culture in the world, such as Disneyland, Statue of Liberty and so on.

Japan, one of the fastest developing countries, but there are also a variety of ancient buildings, and the wonders of nature, such as Inari Shrine and Mt Fuji.

Britain, the earliest industrialized country, but also one of the best countries to retain traditional culture, such as London Bridge, Big Ben and so on.