Chase The Ball Not Available
Removed from the App Store 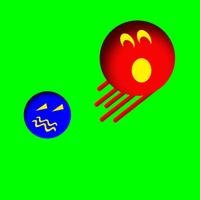 iPad
More Screenshots for iPad
Chase The Ball Description
Some iPhone games are too complex for me. By the time I learn all the controls, when to tilt, when to shake- I've just about lost all interest in the game itself. So I got to thinking… who ever said iPhone games have to be complex? I certainly didn't.

That's why I made Chase The Ball. I challenge you to find a simpler game on the App Store. The object of Chase The Ball is exactly that- to chase the ball! You'll be playing this game for hours, and for that I apologize, but it had to be done. I don't want to give away too much here… besides, the beauty of the game lies in its simplicity.