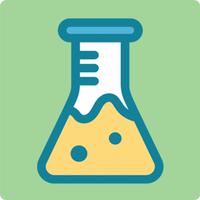 iPad
More Screenshots for iPad
Chemistry - Andaza - Quiz Preparation Test Description
Andaza is a successful series of educational and knowledgable applications for kids and those who are preparing for Examination for different subjects. It Includes the Quiz game with multiple levels. The questions and knowledge in this app is prepared by experts of this subject which can increase your information about the subject. It is the must download App for every Pakistani and those who are researching about this subject to always have it in your phone and play in free time.

The history of chemistry can be traced to alchemy, which had been practiced for several millennia in various parts of the world.

The word chemistry comes from alchemy, which referred to an earlier set of practices that encompassed elements of chemistry, metallurgy, philosophy, astrology, astronomy, mysticism and medicine. It is often seen as linked to the quest to turn lead or another common starting material into gold,[6] though in ancient times the study encompassed many of the questions of modern chemistry being defined as the study of the composition of waters, movement, growth, embodying, disembodying, drawing the spirits from bodies and bonding the spirits within bodies by the early 4th century Greek-Egyptian alchemist Zosimos.[7] An alchemist was called a 'chemist' in popular speech, and later the suffix "-ry" was added to this to describe the art of the chemist as "chemistry".

In retrospect, the definition of chemistry has changed over time, as new discoveries and theories add to the functionality of the science. The term "chymistry", in the view of noted scientist Robert Boyle in 1661, meant the subject of the material principles of mixed bodies.[11] In 1663 the chemist Christopher Glaser described "chymistry" as a scientific art, by which one learns to dissolve bodies, and draw from them the different substances on their composition, and how to unite them again, and exalt them to a higher perfection.[12]

The 1730 definition of the word "chemistry", as used by Georg Ernst Stahl, meant the art of resolving mixed, compound, or aggregate bodies into their principles; and of composing such bodies from those principles.[13] In 1837, Jean-Baptiste Dumas considered the word "chemistry" to refer to the science concerned with the laws and effects of molecular forces.[14] This definition further evolved until, in 1947, it came to mean the science of substances: their structure, their properties, and the reactions that change them into other substances - a characterization accepted by Linus Pauling.[15] More recently, in 1998, Professor Raymond Chang broadened the definition of "chemistry" to mean the study of matter and the changes it undergoes.
Show More Show Less
Chemistry - Andaza - Quiz Preparation Test 1.0 Update
2017-07-14 Version History
More
1.0 2017-07-15
More Information