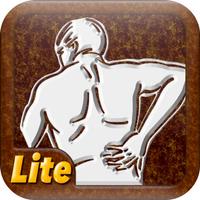 iPad
More Screenshots for iPad
Chronic Pain Tracker Lite Description
Take the guess work out of pain management with Chronic Pain Tracker. Record your pain history with 19 unique health categories. Review a Summary Report with your doctor in the app, or export a PDF for printing/emailing. For less than a typical insurance co-pay, you can improve the management of your pain.

CPT Lite is our introductory level app which let's you try out all of the features with none of the cost. Like what you see? If so, continue using this version by purchasing diary expansion packs to increase the number of Diary Entries you can create (beyond the initial 20 entry limit). If you like it, you can enable additional diary capacity via in-app purchases OR purchase our CPT Pro app for all our features with none of the restrictions.

# Multiple features to help make the creating of Diary Entries efficient and accurate
+ "Tracker Collection" - templates allow you to predefine the Trackers you want to group into an entry
+ "Copy Last Entry" - for each Tracker allows you to bring forward the contents of your last entry
+ “Customizable Lists” - need to add a new pain description or medication? No problem, you can do that without exiting the entry
+ "Multiple Diary Support" - manage more than one diary within the app (available as an add-on feature)

# Share your reports with your Doctor or Care Provider:
+ Print directly from the app to printers supporting Apple AirPrint standard
+ Send PDF report via e-mail from within the app
+ Synchronize Exported PDF reports via Dropbox

If you are suffering with chronic pain, you know it can be difficult to communicate pain history to your doctor. Empower yourself at your next doctor’s visit with the app that allows you to:
1) Track your pain history,
2) Aggregate that data so that it is concise and meaningful,
3) Communicate it effectively to your doctor

Chronic Pain Tracker is the solution that addresses all 3 of those requirements.

This application was designed and developed by a chronic pain sufferer. It’s being used by thousands of people every day to improve the management of their chronic pain. What are you waiting for? Give it a try today!

Before installing this version, you should create a backup of your current database to protect against possible data loss.

FIXED - An additional bug that could cause a repeating processing loop in the Report processing engine.
FIXED - A bug that caused the Diary Filter Change button to disappear from the iPad UI. iPhone devices were not effected by this bug.
FIXED - Some other minor code issues that weren't bugs, but needed to be updated.