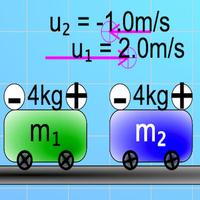 Introduction
Momentum One Dimension Collision Model
The motion of a body of mass m and velocity v is described by a vector quantity known as momentum p where
p = mv
When objects collide, whether trains, cars, billiard balls, shopping carts, or your foot and the sidewalk, the results can be complicated. Yet even in the most chaotic of collisions, as long as there are no net external forces acting on the colliding objects, one principle always holds and provides an excellent tool for understanding the collision. That principle is called the conservation of linear momentum which states that

For two bodies colliding linearly, it is written mathematically as a vector equation

Interesting Fact
This simulation has real and ideal collision simulator targeted for A level Physics education.