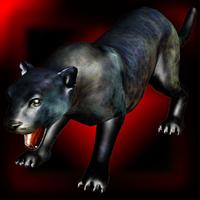 iPad
More Screenshots for iPad
Cougar Sim: Mountain Puma 3D Description
Free Cougar simulator game. The cougar versus mountain forest animals. Become the brown puma or black puma. In this game more than ten animals. Further, there are some American and interesting animals (Bison, raccoon, beast wolf etc..) In this game, you're a wild puma in the forest. You're going to fight against all other monsters of forest. This animals are enemies, prey for cougar/puma. You control easily wild cougar and hunt your preys. This hunting action takes place in the mountain forest. All predators has courage, speed, maneuverability, anger, difficulty, power, energy capabilities. This capabilities are easy to hard according to levels. Totaly 40 free levels, each levels have different challenge. Lets live a wild life with king of the forest as be a puma. Cougar Simulator takes place in mountain forest. Wild cougars live South America or North America. Pumas are are carnivorous. Pumas known as super predators like as tigers, jaguars and lions. Cougar/puma/mountain lion is the fourth biggestcat of the world.