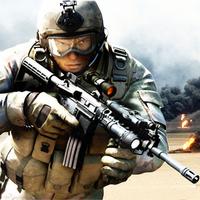 Critical Strike Online FPS delivers the nostalgic Counter-Strike style gaming experience on your IOS smartphone and tablet! Enjoy the smooth and customizable touch controls and play the exciting cross-platform first person shooter against other players on the web and on other mobile platforms.

Create a squad, add your friends and test your skills in dynamic multiplayer warfare against online rivals from around the world!


Fight for domination alongside your friends, or show the world your skill by leading the individual scoreboard.

You can buy an ak47, awp, pistol or knife and go find the terrorists. Find them and show them who is the real deal. Counter and strike your worst enemies, but make sure they don't do it first.

A full range of weapons systems: covers let you experience the thrill of fun variety of firearms, from pistols, submachine guns to the whole set of firearms sniper rifle, eleven kinds of weapons are free for you to choose.
Just fire with your guns and kill the enemy, let us start to play the world's greatest military attack game. Command the national army , brave battle!

Live the crazy experience of a counter terrorist force, defeat and strike the terrorist team and be the savior of the planet.

One of the best First Person Shooter out there. Compete with people around the world and show them your skill.
Free Games: Free download, free coins, you do not pay also can play cool.