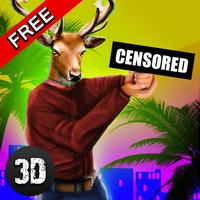 iPad
More Screenshots for iPad
Deadly Killer: Crime City Shooter 3D Description
Load your gun, put on your deer mask and start your shooting mission against all world with Deadly Killer: Crime City Shooter 3D! Act like a psycho maniac and wage the battle against thieves and robbers - shoot, kill, reload your gun and run forward – there’ nothing interesting behind your back!

Deadly Killer: Crime City Shooter 3D is a good opportunity to explore the criminal world full of thefts, robberies, guns, and other beasts! Complete dangerous missions to prove your worth as the most dangerous gangster (or gangster hunter) in the whole state! Attack gang members and policemen alike, kill criminal bosses and just break the law!

You don’t want to be recognized, so don’t forget to put on your deer mask before the massacre. Feel no mercy to killed enemies, be it pushers, prostitutes, serial killers, bullies, enforcers of the mafia, mercenaries of yakuza, police officers or just ordinary peaceful citizens – no one is innocent here, and their time of judgment has come! Earn points for each killed victim to raise up your characteristics, or buy ammo, new guns, and deer masks – different masks have different effects, you know!

Act like a psycho maniac chasing and eliminating criminals, cops and peaceful citizens alike with Deadly Killer: Crime City Shooter 3D! Be a crazed hero from the old movies of the 80s and enjoy views of grotesque, Miami-like city! Hold tight your shotgun (or assault rifle), aim in cold blood and shoot right into the hearts of your enemies! Commit crimes, dodge bullets and enjoy the bloody massacre as the deer-headed man with Deadly Killer: Crime City Shooter 3D!

P.S Don’t forget to put on your mask of stag before the massacre
Show More Show Less
More Information