Discovery: Shark Strike Not Available
Removed from the App Store 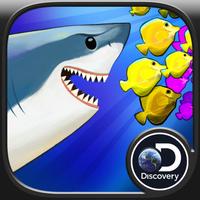 In this side-scrolling adventure game, you are no ordinary shark. When a group of big bad “Boss” Orcas come around and snatch up your shark pups, you set off on an epic quest to get your babies back! You start off as a Reef Shark, but as you build up the skills, experience and shark points necessary, you can climb up the predator food chain and evolve into a Blue Shark, Bull Shark, Thresher Shark or even a Great White! Each type of shark comes with special abilities and attributes—from chomp to speed to stamina. It is your goal to maximize each shark in order to reach your full potential and save your pups. Even the humble Reef Shark has what it takes!

Life in this ocean is tough! To dive in and thrust into the open water, players must eat prey to survive and avoid the dangers of the sea. Make it far enough and you’ll face your biggest challenge—the “Boss” orca himself! Sharks aren’t just mindless eating machines, they are magnificent creatures trying to survive and thrive. You’ll have three challenging multi-level underwater worlds-- the Tropics, the Arctic and Ancient Ruins to explore as you hunt the bad guys down and kick so fin!

Swipe, tap and shake as you battle through each level. Earn Shark Points and Clams as you gobble down prey, achieve high scores and if your lucky, come across the daily ‘Loot Drop!’ Use your points to super-charge your shark powers:
• Chomp: Make your bite more powerful to take down bigger prey and do more damage!
• Speed: Maximize your ability to dash out of danger!
• Stamina: Recover more quickly and last longer in the game!

Use the clams you earn to buy new power-ups and items to help you tread more carefully! Don't like nets? Make the ocean net-free by spending clams on the 'Net Cleanup Service'!

Stand tall at the top of the food chain! Score a big high score to earn a top spot on the Global Leaderboards! Compare your scores to other players all around the world to see who's got faster, shark-like reflexes!

Build your strength for epic ‘Boss’ battles that could win you back your shark pups!

App features include:
• Pinpoint controls let you glide out of danger, attack prey and stay on the path to rescuing your pups!
• Realistic and compelling sound effects
• A wide range of realistic prey—from Angel Fish to Rays, Atlantic Mackerel to Seals, Eels to Catsharks!
• Lots of danger to keep you on your fins, including urchin, jellyfish and orcas!
• Sharkopedia facts keep your stomach full of fascinating shark facts
• New Boss Battles
• Social Features! Share your score and challenge your friends!
Show More Show Less
More Information