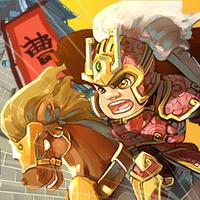 DESCRIPTION
Dynasty Kingdoms Civil War - Experience the classic Three Kingdom characters such as Lu Bu, Guan Yu, Zhang Fei and Zhao Yun. Also includes other female Heroes, the famous Diao Chan, Zhen Ji, Xiao Qiao, and many other waiting for your command. Don't forget the heavenly goddesses and fairies all eager to guide you to victory!
Summon Heroes, strenghten them with armors, enhancements, and awakenings. Battle demons in the earthly realms and rejuvenate in the heavenly realms. Test your strength by challenging summoners from across the world. Engage in Quests (with dozens difficulty worlds), Trials, and Missions to gain EXP and win rewards. Attend events to obtain rare items. Whichever gameplay and activities you choose, there will be endless hours of fun and excitement waiting for you!

Game Features
Free Rewards! Get Elite Heroes with Easy Summoning!
In addition to summoning, obtain high level 3-star Heroes through Quests and Missions. Various Heroes to collect!
Best-in-class, Classic Inspired Artwork
Each character and Hero is carefully crafted and drawn to match its historical accuracy. Experience creative character designs, thrilling battle experience, brilliant Hero skills, and customized battle formations!
Heroes Enhancing and Development
Cultivate your Heroes. Every Hero can be a top General! Even Zhang Fei can defeat Lu Bu with proper training! Includes advance Heroes, new skills, and elemental effects.
Free-style Gameplay - Thousands of Heroes and Armors to Equip!
Abundant armor set system. Strengthen your Heroes through strategic armor equipments! Various Armor Types with many sets to collect and assemble. Only you can decide which Armor sets work best for your Heroes!
Unique Skills with Stunning Visuals
Heroes and their unique element types have their own unique skills! Over hundreds of unique skills to unlock and unleash on your enemies! See your Heroes attack with their unique skills in stunning graphics and visuals!
Gameplay All Under Your Control!
Traditional-styled in a well-designed combat system. Summon the Heroes and unleash their ultimate skills!
Easy In-Game Instructions!
Various Heroes to Collect!
Collect, battle, and share your most-prized Heroes with your friends!
Extensive in-game activities and generous rewards to keep you entertained for endless hours!

Dynasty Kingdoms Civil War is a new simulation/strategy game based on the Romance of the Three Kingdoms saga (Samkok). Build your own empire and feel the heat of war in ancient battlefields! Plan your strategy to achieve eternal victory and unite all kingdoms under your rule! It’s time to fulfill your destiny, as the strongest EMPEROR in history of the Dynasty Kingdoms Civil War!
•RULE YOUR KINGDOMS•
Build and expand your cities, increase your wealth, repel all the enemies that threaten your kingdom!
•CREATE YOUR STORY•
Became a part of history! Finish scenario quests that are based on historical events from the Three Kingdoms era, pitting yourself against many legendary characters such as Guan Yu, Cao Cao, Zhuge Liang even Lu Bu along the way!
•ENDLESS WAR•
Enemies can attack your kingdom! So be prepared to protect your kingdom at all times!
•POWERFUL EQUIPMENT•
Collect unique and exotic equipment based on mythological creatures such as Phoenix, Dragon or Tortoise, each with its own special powers!
•BECAME THE EMPEROR•
Think you got what it takes to become an emperor? Then prove your might, and make your kingdom the strongest of them all!
•LEGENDARY GENERALS!•
Recruit Legendary Generals from the Three Kingdoms era to lead your army! Use their mighty skills and plow your road to victory!
Show More Show Less
More Information