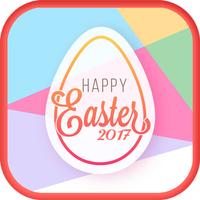 iPad
More Screenshots for iPad
Easter Day 2017 - Greeting Cards And Wishes Description
Happy Easter: Cards and Quotes app enables you to send Easter greetings. As we are concerned, Easter is celebrated by Christians as it commemorates Jesus Christ’s resurrection from the dead, described in the New Testament as having occurred on the third day of his burial after his crucifixion by Romans at Calvary c. 30 AD. It has been called a moveable feast because it doesn’t fall on a set date every year, as most holidays do. It is the culmination of the Passion of Christ, preceded by Lent (or Great Lent), a forty-day period of fasting, prayer, and penance.

The week before Easter is called Holy Week, and it contains the days of the Easter Triduum, including Maundy Thursday, commemorating the Maundy and Last Supper, as well as Good Friday, commemorating the crucifixion and death of Jesus. In western Christianity, Eastertide, the Easter Season, begins on Easter Sunday and lasts seven weeks, ending with the coming of the fiftieth day, Pentecost Sunday. In Orthodoxy, the season of Pascha begins on Pascha and ends with the coming of the fortieth day, the Feast of the Ascension.

Easter is linked to the Jewish Passover by much of its symbolism, as well as by its position in the calendar. In many languages, the words for "Easter" and "Passover" are identical or very similar. Easter customs vary across the Christian world, and include sunrise services, exclaiming the Paschal greeting, clipping the church, and decorating Easter eggs, a symbol of the empty tomb. The Easter lily, a symbol of the resurrection, traditionally decorates the chancel area of churches on this day and for the rest of Eastertide. Additional customs that have become associated with Easter and are observed by both Christians and some non-Christians include egg hunting, the Easter Bunny, and Easter parades.
Show More Show Less
Easter Day 2017 - Greeting Cards And Wishes 1.0 Update
2017-04-12 Version History
More
1.0 2017-04-13
More Information