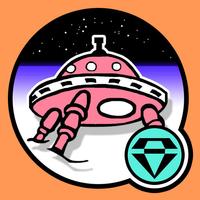 iPad
More Screenshots for iPad
Explorers of Space (Perfect Clone): Elektronika IM-13 Description
Have you ever kept in your hands of a real handheld electronic game «Nu, Pogodi!» (Wolf catches Eggs) or "Explorers of Space"? If not, then do not waste your time, most likely that you will not be able to distinguish this app from a variety of low quality fakes, existing in the App Store. This application is designed for true fans of Soviet handheld electronic game series «Elektronika IM». According to a specially developed technology, we have studied the KB1013VK1-2 four bit microprocessor, which is the basis, the "heart" of all Elektronika games, and fully implemented the algorithm of its work in this application. Thus, we are left far behind all of our competitors with their numerous implausible versions of the game.

It is not a replica. For the first time in front of you ... the Original! Or, if you want, call it a Clone. The exact Clone. Perfect Clone! We even did not record any sounds from the original game. Sounds are being generated by the original program from the microprocessor, without our participation! All the timings and game modes are preserved! You will not find any difference between this game and the original, because game process is driven by the same algorithm as the original Explorers of Space game! If you don't believe - try to compare yourself. If you will find the difference, we will return your money back!

We also studied the behavior and reaction of the liquid-crystal display (LCD) of the original game device, depending on the level of battery charge, and made in the game the ability to simulate low battery! Maximum of realism! Play just as if you were playing a real game from your childhood!

Now, your favorite game "Explorers of Space" again with you - it will not get lost and will not break ever!

● The world's first digitized original Soviet game "Explorers of Space Elektronika IM-13";
● Fully implemented algorithm of work of the original microprocessor of the game;
● We studied electrical scheme of the game and made game buttons work just as in the original device;
● We examined LCD display of the original game and implemented its characteristics in the app;
● You can select filter of the LCD display from three possible types:
1) Analog - maximally close to reality,
2) Digital - with the instant reaction of the display,
3) Off - without filter, in this mode on the game screen you can see so-called «garbage», that appears when the game microprocessor updates the display.
● There is a settings menu in the game. To enter it, tap the logo in the upper left corner of the game body;
● You can change the color of game's body, as well as the buttons’ colors;
● You can simulate different battery charge level of the game;
● Ability to change sound source to the other sound port of the microprocessor and hear completely different sounds, which output from a real chip of "Explorers of Space"!
● Game Reset function, set the time and alarm clock, as in the original;
● Special mode "Game A+B", which exists only in this electronic game, when you shoot rockets and microprocessor tries to catch them;
● The automatic synchronization of your iPhone or iPad clock with the clock in the game;
● You can monitor the work of the microprocessor of the game, watching in real time the values of the registers and the contents of its internal 65 memory RAM cells;
● Integration with Game Center, share your best results with your friends!
● Developed for both iPhone and iPad;
● On the iPad, you can move the game on the screen by dragging game’s display with your finger up or down;
● On the iPad, you can play in both landscape and portrait orientation of the device;
● Support for high-resolution graphics for all models of iPhone 3GS, 4 / 4S, 5 / 5S / 5C, 6 / 6Plus / 6S / 6S Plus, iPad 2 / 3 / 4 / Air / Air 2;
● Compatible with iOS 6 and above;
● Tested on iOS 9
Show More Show Less
Explorers of Space (Perfect Clone): Elektronika IM-13 1.0 Update
2015-11-17 Version History
More
1.0 2015-11-18
More Information