Fake SMS+ Not Available
Removed from the App Store 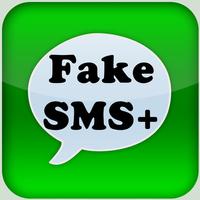 iPhone
Fake SMS+ Description
Five stars is not good enough. 10,20,30 even 40 stars. I have been searching for ages for the perfect fake texting app and this is it. I have fooled many people and I just love it! [Oliviaedmunds]

The only app that support 21 languages

A brief explanation
The idea is to write a conversation about a sensitive issue such as cheating girlfriend / boyfriend, pregnant, confession about something that not happened
Then show the conversation to friend while you're on the verge of tears and can't explain what happened then you tell him you read and understand
And look at his face that he really going to cry
Then tell it did not happen that was a joke

Pinkygirlutah Aaaaaagggggg! ★★★★★
That scream was a scream of pure joy. Without this app my life would be nothing! No problems in the app, everything is perfect! I know nothing is perfect but this app izzzzzz! Wonderful!

Kaylaechols Great!!:) ★★★★★
It's really good! It's the best in fact. It really needs more upgrades though. I love it!!! :) It's DEFINITELY worth 99€! I think they should make it free for like 2 weeks to let everyone see how great it is, and then put it back to 99€. I'm amazed. It looks so real. Just like the real iPhone's messages. :)

Jokes, alibi, cheats, love, secrets ... no limit to your imagination!

The fake message received with received message sound after 15 seconds

Please rate us ✭✭✭✭✭ stars on AppStore. Your high ratings and reviews keep the updates coming.