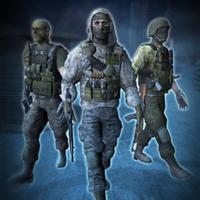 iPad
More Screenshots for iPad
FPS Crossfire Ops Mission Description
FPS Crossfire Ops Critical Mission is a war against modern terrorists and an opportunity to be your national soldier hero, so you will gain powerful advanced modern weapons! Quickly destroy the enemies you see and move on to the next position, do not let them fight back your attacks or counterattack clear your military base and win the war at all costs as soon as possible.
You must be use all of your sense and special skills of survive the on-sight of the modern terrorist’s forces and kill all the deadly soldiers’ terrorists. You will face different kind of enemies just like sniper soldiers and also assault shooters. Your enemies are full loaded of these deadly and heavy weapons like AK47, MP5 and Sniper weapons.
Lots of lots amazing deadly weapons will absolutely make you play soft. Come and choose your favorite weapon. There are endless crossfire action missions here. The game has dynamic weather effects, realistic ballistic simulation, and real battlefield environment, allowing players to be on the scene and put it down. In the moment you shoot a bullet, the exquisite bullet effects will perfectly reproduce your wonderful shot. No Wi-Fi, no problem, anytime, anywhere, join in this sniper war; enjoy the thrill of shooting the enemy.
These evil crossfire soldiers occupied the large area of northern military base; you have to clear this as a gorilla warrior, play as a silent player, eliminate all soldiers and take bake the area.
Game Controller:
• Use joystick to move player.
• Use grenade button to throw it
• Use zoom button for zooming weapon
• Use switch button for swapping weapon
Get ready to shoot & kill in this thrilling free FPS 3D action packed crossfire ops-mission incredible game. This is a special ops mission of evil crossfire-terrorist that will let you experience & use battle survival & gun shooting skills in intense & eventful war environment. You are the best army crossfire-shooter of the country so be a military commando army soldier super hero who has to hold aim & target in this ultimate silent killer special ops shooting mission.
Do you like FPS games this is a best first-person action shooting game! The world major power provides you with all types of modern war weapon and equipment’s to make you best against frontline Soldier War forces. You will be an elite shooter in next levels but shooting in different hurdles and terrible hindrance points, you accurately identify the target, quickly destroy the enemy. Once you start shooting, the enemy will know your presence, search for you everywhere, and attack you on the search. Jump in the heat of battle and push your survival skills to the limit!
The world major power in order to let you better performs the mission, to provide you with a variety of advanced rifles and equipment, so you can more easily kill the evil soldier. But you have to be careful, survive in the battle, and fulfill your mission.
Game Features:
1. Realistic 3D environment, high-quality 3D graphics
2. AK47, MP5, M4 rifles, Shotgun, Sniper rifles
3. Challenging missions
4. Face challenges and improve your shooting skills
5. Play anytime, anywhere
What are you waiting for, let's take a journey and start killing, eliminating the entire evil soldier. From the M4 Rifle to AK47 and guns, as you have access to a variety of light and heavy weapons, as well as powerful grenade too! In the battle you will be sent to different locations to perform the difficult survival tasks.
Show More Show Less
FPS Crossfire Ops Mission 1.0 Update
2019-03-15 Version History
More
1.0 2019-03-15
More Information