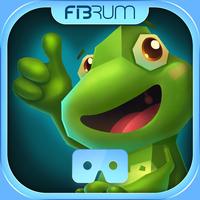 iPhone
Froggy VR Description
Help a froggy find its loved one, stolen by the evil alligator. Eat all the flies you want and look around the swamp as you explore it to collect all the bonuses!

Enjoy the ultra-realistic 360 3D VR world with detailed graphics and carefully crafted sound merged together for the most immersive atmosphere.
Put on your VR-headset and experience an incredibly emotional adventure in virtual reality.

The app implements a freemium system. During the whole trial period, you can play absolutely free! If
you like the app, register a promotion code or purchase the app to use the application to the fullest and
get unlimited access to it. To do this, just go through a quick registration in Fibrum Platform.