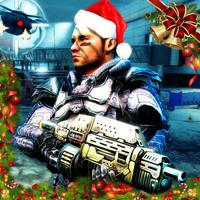 iPad
More Screenshots for iPad
Frontline Force Elite Killer War Description
Aim and shoot to complete the missions in the shooting battlefield. Load your sniper rifle and go for a head-shot or just start the fire like a ruthless ranger in the frontline. This is what the “Frontline Force: Elite war” is about. This free 3D FPS game can be easily compared to the SWAT Team games you can find on consoles, thanks to its 3D graphics, real environment sounds and of course smooth control.
There are lots of assassin, anti-terrorist and conspiracy missions to complete, and they have all just one goal: Shoot and kill the enemy before getting hit.

To strike and take down enemies you’ll have a full arsenal to choose from: from different rifles and shotguns to snipers and grenade.

Once you go to the Weapon menu, you’ll see 4 tabs to go: Items, Rifles, Shotgun and Snipers.
After acquiring a weapon, there is the option to improve the power of your weapon by upgrading the weapon’s parts. You get to upgrade almost every part of your weapon. The better and strengthened weapon, the more chance to survive and succeed in the frontline force.
After getting paccked it’s time to head to the battlefield and start your mission. The camera angel is like any other first person shooter games and you can easily move and look around by touching the screen.
When you start the mission, there are several enemies to shoot and take down. Note that, they cannot see and feel your presence, unless you start shooting. After that, you need to hide to avoid the enemies’ attacks and then go for the shoots. So, it is wise to aim for head-shot, so you don’t have to worry about the enemy’s counter attacks. For a perfect head-shot, you just need to arm your sniper, zoom, aim and kill the attacker with a single gunshot. If you miss your first shot, the terrorists will notice you and it really is hard to survive. So, make sure to strike at the right time and with the right aim and shoot.
There is also the Achievement section which is kind of addictive, as you tend to play the game more and more to complete the entire achievements. For completing each achievement, you’ll get some money and gold to spend in the game.
The Daily Rewards will give you guns, gun parts, gold and money if you play the game for 7 consecutive days. The Daily Challenges is to reward those who play the game on daily basis.

Game Control:
An FPS game on mobile is all about having a smooth control over your character. The good news is that you don’t have to be a professional in 3D FPS Games on mobile devices to be able to play the Frontline Force. To find and aim at the enemy, you just need to touch and move the screen. Once you located the enemy and you were ready to shoot him, simply use the fire button to shoot. For targets, far from your eyesight, you better use the sniper to zoom in at the enemies using the sniper scope and easily take down the target from a small distance. you kill the enemy, zoom out to see the entire shooting battlefield. Don’t forget about aiming for the head, as it just takes one accurate shot to kill the enemy and stay away from their onslaught.

Should I install and play this Elite War game?
If you are into 3D FPS games and care for user friendly UI, smooth control and high quality with console-like graphic experience, then this game is just for you.
If you like the “Aim and Shoot” games and want to be able to choose from different weapons with the option to upgrade them, then this game is just for you.
Show More Show Less
Frontline Force Elite Killer War 1.0 Update
2016-12-13 Version History
More
1.0 2016-12-13
More Information