Gazi Not Available
Removed from the App Store 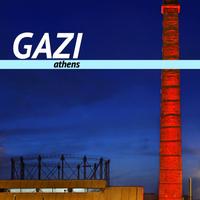 iPad
More Screenshots for iPad
Gazi Description
That’s Gazi. It’s the place to define your meaning of a great night out. People bump shoulder to shoulder in its narrow streets that are filled with more crowds that hover around good drinks, conversation and company. Each turn there are more choices; a new bar to have a fancy cocktail, a trendy place to dine or a packed place to dance. The diversity in music, ages of people and types of food has become part of an energy that is tough to beat in any other part of Athens today.

Just two decades ago, Gazi was quiet. The city’s undesirables built a small neighborhood in the shade of an old gas tower – that still stands today. That’s what Gazi means in Greek – gasworks.

1984 marked the historical year Athens Gasworks closed down. It was the only gas factory in Europe untouched during WWII, because the Germans feared bombarding it might harm the Acropolis. Following that time, it was a refuge for immigrants and even housed brothels, but by the nineties its incredible development was well on its way.

In 2007, the opening of the Kerameikos metro stop secured Gazi as a place to spend the day and to live and work. The station’s escalator leads up into Gazi’s large concrete square where cafes, bars, galleries, theatres and clubs pack the surrounding streets. Over the past decade alone, it has been reported that property values have soared 300 percent, quite a change in value for a place that used to cover the city with soot.

“There is a special atmosphere here. You’ll see a tourist watching groups of people laughing, little children playing, bands performing, teens with skates and bikes, senior citizens discussing politics at the Gaze al’ eau cafe to couples flirting,” says Fotis Ignatiou of Athens City Council. The old gas tower is still part of the area’s skyline… but in modern form. It has been completely cleaned out and redesigned as a chic industrial cultural centre called Technopolis of which Ignatiou is also the Chairman and Managing Director. Technopolis is hailed as a one of a kind cultural centre in Europe, hosting diverse events from art to fashion shows. “Europe has many old industrial spaces that have been transformed, but what’s so unique here is the rate of cultural development after so many years of abandonment.”

Ignatiou explains that Technopolis is a mix of Gazi’s past and its artistic present, remaining as a great example of how a de-industrialized space can set the pace in a city’s cultural life all the while maintaining its unique identity.

“A walk, any time of day or night here, would be enough to feel the atmosphere in Gazi and notice characteristic details. For example, Technopolis’ blast furnaces were specially lighted to resemble the fiery color they once had, projecting how important it is for a cultural space to remain “sleepless”. Especially on weekends, Gazi can certainly be described as sleepless. “Gazi and Technopolis provide infinite choices for having fun, no matter what age, orientation or preferences may be. At any time of the day, we are setting a unique pace in the heart of the city.”

Gazi’s public square and its surrounding streets, Iakou, Persephonis, Dekeleon and Voutadon are lined with cafés that double as bars come nightfall. The district branches out further around the square where you’ll find more nightlife and the heart of the city’s gay scene. It’s a place to sit and have a great meal. Go around Greek dinner time which starts at 10pm – when you’ll begin to see tables fill up. Try The Butcher Shop for delicious grilled meats, or Kandavlos for Greek fast food, like souvlakia, which are less pricey, tasty and right next door.
Show More Show Less
Gazi 1.0 Update
2016-09-20 Version History
More
1.0 2016-09-20
More Information