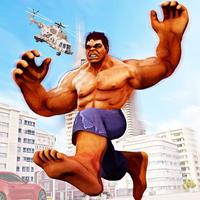 People of your city trust you with the security of their city from criminals and terrorists as you are the super monster hero of your city. Military army has been conducting special ops missions to fight & kill these villain terrorists & criminals. These kind of missions are conducted with the help of special forces who are skill in fighting & gun shooting, modern weapons & guns, warship aircrafts, airplanes, gunship helicopters & fighter jets. Commando army soldiers are equipped with assault rifles, sniper, m4a1, pistols, bombs, grenades and AK47. Army military commando soldiers have been using army sniper shooters to fight, kill & restore the peace of city. But now military army requires your help to kill theses terrorist criminals & get rid of them once and for all. With your super mutant monster strange supernatural powers, fighting, combat war, gun shooting skills & help they will be able to restore the peace of your city. Free roam the city, drive around in cars, climb the buildings, fight terrorists & crime & be a true monster hero in this thrilling action filled free game.

Strike hard at the enemy as you are the super monster hero & counter all enemy attacks to increase your chances of survival. Your city does not need any spider hero with supernatural rope as you are enough to combat the enemy equipped with modern weapons. Face all the gun shooting fearlessly & shoot back at enemy to save the pedestrians on the roads full of traffic. The peace of your city depends on you & your survival. Drive cars, race, drag & drift the throw the traffic or climb the building. Pick up the cars to throw at the enemy, fight & shoot back when the shooting starts. It’s a war against criminals & terrorists, it’s a war of survival. Win this battle, survive & save your city to be the true war assassin monster hero.
Show More Show Less
More Information