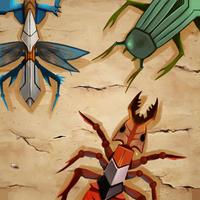 Dive into the fierce battle of insects. Bugs, ants, wasps, cockroaches, mantises and spiders collided in furious smash for food and territory. Did you ever want to become one of them and live a life of a tiny beetle? Insect.io 2 gives you a chance to do it!   This Insects are really everywhere. They evolved, they got angrier and more hungry, and they are ready to kill and eat each other to survive. Now, they can transform and evolve not only organically, but technologically as well. Did you ever see ants with high-tech armor or cockroaches with razors and saws instead of their limbs and claws? This time you can grow up your own fighting cockroach that will exterminate other bugs.
Someday wonderful world that was hiding invisible from our eyes now showed its true nature! It does not hide any more! Mighty monsters and fierce creatures constantly lead a permanent clash of monsters and insect smasher against each other for the territory, food and survival. But now they expanded their battlefield on your kitchen and beach. Now these creatures are even more insatiable, fierce and hungry.

You have a unique opportunity to experience a life of insects in their natural habitat in tiny universe on the other side of magnifying glass with other diminutive settlers as caterpillars, wasps and bees, hornets, ant, bugs, cockroaches, worms, slugs and other extraordinary tiny creatures. Go deeper into it and learn more! Conduct a microtrip in this amazing world of beetles.

Become a monstercrafter and decide by yourself how your new insect will look like. Feed and grow your own fighting insect. Don’t make creatures starve! Use genetic code collected in clashes of tiny monsters and create a new organism. But remember, in this dangerous universe of little creatures there is no space for herbivore species of insects. Only carnivorous predators can survive and evolve. This place is for meat eaters only.

Start as a tiny nasty cockroach that can hardly survive several seconds in this unsafe environment. Run away if you see another moving objects, devour DNA of other monsters and just collect DNA scattered over the territory. Try to find your ark of survival. The only way how you can survive is to constantly evolve, acquire new skins, improve parameters of the insect and constantly change the tactic against other insatiable monsters. More different species and evolutionary forms. Try the role of scientists in cell labs who genetically modify monsters, substitute their body parts with advanced prosthesis and improves their ability to survive.

There are three main evolution stages available but each of them has hundreds of configuration allowing to make your mantis, ant or cockroach truly unique! Just eat DNA and evolve!

The tactics available for players vary tremendously! Depending on the monster’s evolution stage it can become a tiny weak but very fast bug or, in contrast become a furious, mighty and dangerous monster easily devouring other inhabitants of this tiny universe, showing its power in clashes. It is completely your decision on which skins and parameters to spend the DNA collected in the battles and which evolution path to choose. Choose and evolve wisely!

*The strategy is simple:*
- Attack the weak and flee from the more mighty and angry monsters or hide somewhere and stay invisible until they pass or get distracted by another victim.
- Improve your armor, claws and thorns to survive in this dangerous and evil world
- Help your horrifying spikes grow into powerful technological prostheses and demonstrate your strength in the group battles
- Enjoy the view of the remains of your enemies and atmospheric game music