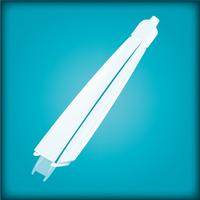 The digital pen works just like a highlighter! Simply slide it across lines from newspapers, magazines, books, letters, etc. and the text will instantly appear on your iOS device, ready to be edited, saved or shared to the Cloud.

- Never retype text again: digitize and edit text from books, magazines, invoices... directly on your mobile devices.
- Translate text into your native language and vice versa.
- Hear what you have just scanned spoken out loud by your device – a great way to get the correct pronunciation, for instance if you are learning a foreign language!

- Capture your text directly onto your device
- 55 languages directly recognized on your device in offline mode.
- 130+ languages recognized if you connect to our IRISPen™ Air Cloud server.
- Use the text-to-speech functionality to hear out loud what you have just scanned.
- Instant translation of your captured text lines.
- Text and number recognition.
- Export to Mail, Dropbox or Google Drive™
- Copy paste your text into any text application, ready to be edited as you please.