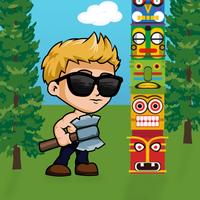 iPad
More Screenshots for iPad
Jon Description
Introducing Jon Brownell. He's a fitness model, an athlete, a personal trainer and now, a log chopper. This game includes a high score, beautiful visuals, and of course the legend himself, Jon Brownell.

Jon Brownell is one of the top online fitness trainers in the country, as well as a top fitness model. He grew up in a small town near Buffalo, New York. He was always a stand out athlete, in football, basketball, baseball, but I hated working out. It wasn't until his brother was killed in a car accident that I got serious about my health, fitness, & nutrition. For almost 2 years he suffered from post traumatic stress disorder, severe depression, & severe anxiety. Jon utilized his knowledge in fitness / nutrition, became obsessed with learning more and more, then began applying it to a "T".

Jon competed in 2 NPC Men's Physique shows. He took 1st Place for the Overall in the first show, then 1st Place in Class C for my second show. A couple months after, he moved to NYC and signed with a top Fitness Modeling Agency. Jon Brownell got his first supplement sponsorship, booked a bunch of jobs, and was featured in countless magazines; including Men's Health, GQ, Muscle & Fitness, Runner's World, Flex Magazine, & Inside Fitness just to name a few.