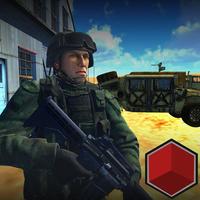 Feel like one man army combat warrior,real soldier,commando,assassin,special force of elite unit invasion in a battle field or war zone.

Feel free to download it and enjoy.It is very thrilling and adventurous game.You will feel like you are in a real desert and aiming your targets in a real time.

It include wide range of sand which looks great.Enemies are almost on every part of it.Commando is fully loaded to attack n kill targets.


There are many shooting adventures and a venture in a like of a commando as in top commando games.You have to be a trained killer to survive in a free battle field.Most of the assassin games are like this games which reflect a war zone.Insurgents are invading a territory which you have to combat.

Download it and enjoy.It is very thrilling and adventurous game.You will feel like you are in a world war 2 and aiming your targets in a real time.

Nowadays terrorism are the uprising global society issues. All the international allied forces as well as local security forces are keen and motivated to eradicate this social evil.
Inspired from our real heroes and martyred soldiers this game is developed. Our aim is to boost up the moral of world arm forces as well as provide entertainment to shooting game lovers.