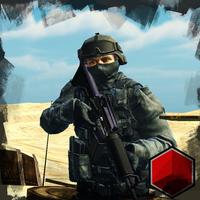 There are many shooting adventures and a venture in a like of a commando as in top commando games.You have to be a trained killer to survive in a free battle field.Most of the assassin games are like this games which reflect a war zone.Insurgents are invading a territory which you have to combat.

Download it and enjoy.It is very thrilling and adventurous game.You will feel like you are in a world war 2 and aiming your targets in a real time.

Nowadays terrorism are the uprising global society issues. All the international allied forces as well as local security forces are keen and motivated to eradicate this social evil.
Inspired from our real heroes and martyred soldiers this game is developed. Our aim is to boost up the moral of world arm forces as well as provide entertainment to shooting game lovers.

In this new game a Special assassin commando named as Jonty was going through a desert on military U6 helicopter.He was attacked by the enemies and his helicopter was crashed.He came out of helicopter in a blink of an eye and start aiming his targets.He got six different types of guns and couple of knives,AK 47,M1 911,MP5,M4,Sniper,Knife and Katana.In this mission there are 6 terrorist in wide range of a camp.Commando got complete map of a camp and radar as well.He has to kill all enemies to get a car key which will help him to accomplish his mission.

In Second mission Jonty comes on car.In this mission 12 enemies are creating problem in a town.Commando is specially trained to handle this type of situation.Difficulty level is increased in this mission as compared to first mission.Commando will find a card during this mission which will help him to complete his mission.

In this mission Jonty will face a difficult situation.He has to make a plan for his survival by killing his enemies.There will be different options for him to use sniper,simple gun and bombs.Bombs will be the good options as it kill more in few seconds.So he will plant bombs on different sites to destroy his opponent.Commando is fully loaded to attack n kill them.

Fourth mission is last military mission.Which has many waves of attackers.Attack is planned at early morning which is quick and sudden.Commando is loaded with 5 different guns,pistol and a knife.But due to waves of enemies sniper will be the best option.He has to destroy their plants to get access of their data against military.He has to cross a gate by pulling its doors through a magnetic Crane.Finally he get access to data.In the end he will escape in helicopter.