Laser Chess Not Available
Removed from the App Store 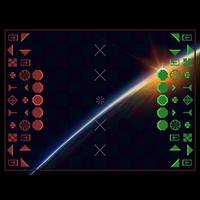 iPad
Laser Chess Description
Laser Chess is a classic chess game with lasers and mirrored pieces. This game is an implementation of the Advanced Laser Chess with custom boards (including classic laser chess) coming soon.

Directions for using the game:

Move by selecting a piece and choosing where it moves. Cancel move by deselecting.

Change direction by dragging in any given direction. Cancel by changing direction back to original direction.

Touch & hold down a laser or a stunner to fire. (Hold as long as necessary to observe beam bounces)

Find out more at www.laserchess.org

We tried to make the game as quick as it can be, without english words (with the exception of the sounds), and based on the reference Laser Chess implementation. Please look for updates and custom levels once it is out and played by expert players. www.laserchess.org. 23 years of fun.

1- Orientation Jitter when the device is held flat or rotated slowly.
2- Pieces being too easy to accidentally touch-turn when they only a move is intended.

1- Missing beam segment when a beam reflects 90 degree left from a triangular shape. (does not effect game play)

What to Wear ™ Social Networking