Mechs vs humanity Free Get 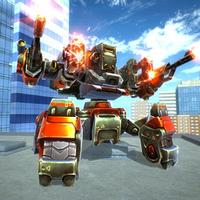 iPad
More Screenshots for iPad
Mechs vs humanity Description
Welcome to the theater of brutal technology fighting where humanity is trying to correct its technological mistakes, and at the same - save the earth from global extinction. Human civilization has gone too far.
For the defense of their territories, humanity built military robotics legion and awarded them with AI to help them adapt. This became a ruthless mistake of humanity. Mechs, having the opportunity to communicate among themselves, created a rebel faction and rise mutiny against people. So, Earth became into the battleground, and freedom defenders were in sci-fi robots war. This is a destiny of human civilization.

But that's not all special news for today. In epic "Mechs vs humanity", despite to game development traditions, we send you to the robotics legion battleground, but not as humanity freedom defenders, but as rebel faction of sci-fi robots and battle mechs. As a battle mechs, you must decide the destiny of human civilization. Robotics legion has to fight with hordes of earth freedom defenders in urban cities full of civilians. Your main quest, with the help of special powerful weapons like machine gun, flamethrower, laser gun, plasma gun, railgun, grenade, bomb, rocket launcher and wit tactical thinking, is to destroy earth freedom defenders and adapt robotics legion legion on the Earth.

In "Mechs vs humanity. Destiny of human civilization" there is a wide variety of special military mechs that you have to discover for yourself on battleground during the sci-fi robots war. These killing machines, large metal monsters encased in armor, with a huge stock of ammunition and huge guns like a railgun, flamethrower or plasma gun. Sci-fi robots and cyborgs legion were built only for one quest - a ruthless and fiercely reflection of the attacks of human forces. Robotics legion perfectly cope with their task.

Mechs vs humanity. Destiny of human civilization is not a simple game. Although you have huge guns (railgun, machine gun, rocket launcher, plasma gun, flamethrower and so on) and armor, but the number of robotics legion in many ways inferior to the forces of Earth freedom defenders. The humanity freedom defenders can easily surround you or find you on the spot. Be smart and fit. Plan your attacks and carefully choose the site of the offensive on the battleground. Carefully choose your main weapon, in many cases, the success of the operation depends on the correctness of the choice. On the battleground of mechs vs humanity scattered boxes in which you will find special weapons and additional equipment. Destroy people's houses, blow up their equipment and destroy the human civilization. The fate of human civilization lies in your hands and everything depends on you.

Explore the urban open world, explore giant streets, fight for your cause.