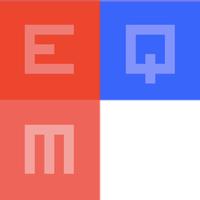 iPad
More Screenshots for iPad
Meqanic Description
Play Meqanic, the amazing physics-based puzzle game that matches you against the Universe. Meqanic is NOT JUST A GAME; it is a full, completely accurate, QUANTUM MECHANICS simulator.

Years in the making, Meqanic is unlike any other game you have ever played. Meqanic has rules, but they are NOT intuitive because they are based on the quantum laws that govern the Universe itself. It's up to you to figure them out as you go. Getting good at Meqanic requires a fundamental change to your thinking.

Meqanic is a challenging game with infinite complexity and meaning. It is worth the time you put into it. Try it out and tell us what you think. Thanks!

(1)--- 280 CORE puzzle levels from easy to mind-bending to impossible
(2)--- Leaderboards and Achievements, challenge your friends
(3)--- An EXPLORE mode to practice and learn the quantum rules
(4)--- Additional level collections for purchase
(5)--- How to Play guide
(6)--- Improvements, new collections & features on the way
(7)--- If you complete a collection, you will see something cool
(+)--- Be on the lookout for Bonus collections

All proceeds go to further and future development of Meqanic, supporting undergraduate programmers.

If you like the app, come back and rate it. If you find a bug or have a suggestion, send us an email so that we can fix it. We won't annoy you in the game to rate our app. Subscribe to our email list for the latest updates and announcements (like new or free level collections).

The biggest update yet! We hope you enjoy it! Now with iPhone support!!!

- Meqanic is now a universal app, play it on the iPhone, iPod Touch, or iPad.
- All new block images: flatter, cooler, more in-line with the design of the Meqanic app.
- We’ve added shading and some 3D perspective to the toolbox and image match frames so it is clearer that the block toolbox scrolls.
- We’ve added a new scroll animation on each level start that scrolls through all the blocks in the given level, so it's clearer what blocks are available to you for each level.
- The iPhone/iPod Touch interface has been tuned for the smaller screen.
- Meqanic shows your combined Game Center rank on the home screen, but doesn’t bug you otherwise.
- Loads of bugs fixed and possibly some added. :)