My Uncrowded World Survival Free Get 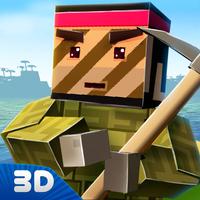 Own shelter of last survivor

Someday most of the mankind extinct. Someone says that it was after days of the zombie plague, someone – that it was a nuclear blast that destroyed all thing. Or, maybe it was the giant tidal wave or even wrath of Heavens, who knows?

Anyway, most of the humanity becomes a horde of shambling corpses roaming on the vast spaces of abandoned blocky world. Few survivors stay hidden in the underground vaults and catacombs for decades.

But now your vault opened, and you’ve step to these not so radioactive badlands inhabited by mutant animal creatures - boars, bears, wolves, and tigers! Fight for your life, keep your weapons alert to deflect attacks of predators!
Even more, there are many undead monster creatures too. Zombies, ghouls, and wights – you can find any kind of living restless dead here! ! Use different pixel weapons – sub-machine guns, pistols, sniper rifles, assault rifles, grenade launchers, katana swords, bowie knife, machete and others – to defeat all of them!

Chat with other players to coordinate your actions! Join massive PvP or PvE battles and have fun!
Survive in an abandoned pixel world filled with mutant animal creatures and restless dead, commute with real players from other countries and enjoy My Uncrowded World Survival game!