Napoleon Frog Not Available
Removed from the App Store 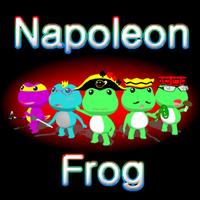 iPad
More Screenshots for iPad
Napoleon Frog Description
1. Introduction
Napoleon Frog is the card game of Napoleon (Tricktaking game) with a friendly frog (named Kaeru-san).
The card game of Napoleon is a strategical game.
It is divided into Napoleon team and Union team, and they struggle for the 20 scoring cards (A, K, Q, J and 10 of each suit).
The rule is little bit difficult. But if understand it, it is very interesting.
There are many local rules, and Napoleon Frog includes them.
If you like the card game of the poverty, you will understand strategical interest of Napoleon.
Of course beginners also will like it. And Tutorial mode is prepared for them.
I am pleased if you get interested in Napoleon with cute Kaeru-san.


2. Overview of the game
Players are YOU and 4 frogs.
At first, you choose a play round(s). (You can change rules and settings here.)
Napoleon Frog is played with 52-card pack and a Joker.
Each player gets 10 cards. The last two or three cards are put face-down in the middle of the table.
The play circles clockwise. Napoleon leads to the first trick, and winner of each trick leads to the next.
At first we decide Napoleon by The Napoleon declaration. Anyone can be Napoleon. (See 3. The Napoleon declaration and the Adjutant)
The Napoleon declaration is to declare a suit and a number of points.
Player who take more difficult conditions becames Napoleon.
If you do not want to be Napoleon, you can pass. (Any number of time.)
Napoleon chooses a partner by calling any card.
Player that holds this card is the Adjutant. The Adjutant is a member of Napoleon team and cooperates Napoleon.
After selecting the Adjutant Card, Napoleon picks up the blind, and discards the same number of sheets.
Sometimes the Adjutant card is in the blind. If so, Napoleon has to play alone.
If the Get Discard option is on, there is a strategy that Napoleon discards the score cards and will get them in the first trick by a win.
Players that are neither Napoleon nor the Adjutant are Union team. They cooperate each other.
Napoleon leads to the first trick, and the winner will be decided after 5 players led. (See 5. Play game)
The winner gets the scoring cards. (A, K, Q, J and 10 of each suit)
The winner of each trick leads to the next.
After repeating 10 tricks, If Napoleon team gets the number of points or more than the declaration, they win.
The other three players form a team whose aim is to prevent Napoleon and the Adjutant from fulfilling the bid.
If Napoleon team takes all 20 cards, they lose. (This rule can be changed in the Rules & Settings. See 12. Rule of Completion.)
The records show after all the rounds.
Show More Show Less
Napoleon Frog 1.4.21 Update
2016-03-31 Version History
v1.4.21
Bug fixed (The Joker Hunter always wins without the Joker.).

Bug fixed (When Napoleon is standing alone, the rest of turns can be skipped before victory or defeat are decided.).

v1.4.17 2016-1-10 UTC
Rule of Completion setting was added.
When the Betrayal option on, before being the club 10 open, the rest of turns can be skipped after victory or defeat are decided.
FI (Frog Intelligence) was updated.
Bug fixed (Without Joker, three or more cards can be selected when the cards exchange.).

v1.3.5 (Update) 2012-11-28 UTC
Renew the code and improved the stability of the game.
The function of the display of the got score cards was added.
Added the select buttons, to go back to the title or the menu.
Added motions. (Look sideways)
Bug fixed. (When Get Discard option is on, the game freezes if the joker is discard when the cards exchange.)

v1.3.0 (Update) 2012-10-2 UTC
Compatible with iPhone5.
Added the function of the motion (Blink).
The parameter of the Napoleon candidate for Kaerusan was adjusted.
Bug fixed. (Sometimes the records disappear, if a game is forced to terminate.)

v1.2.8 (Update) 2012-8-23 UTC
Added the first trick options (Joker leads, Special Cards, Same 2).
Added the option that the Joker can be used anytime.
Number of the Napoleon declaration was changed from 11.
FI (Frog Intelligence) was updated.
Bug fixed.
(Excursus: The game starts by tapping the title except the language buttons also.)