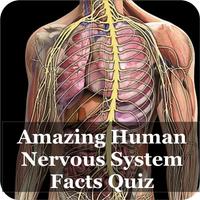 What do you get with The Nervous System Facts Quiz 3000-

- Powerful search engine, preset views, and easy-add features
- Search or browse for the anatomy you need to study or show
- Add anatomy or dissect
- Save, annotate, and share visuals. Create a Favorites library.
- Use the Tour feature to create a visual presentation


Now Medical have also created custom built anatomical models which have been built from the ground up specifically. The result is unparalleled graphics and functionality.

Learn while playing and play while learning with our Human Brain Facts & Quiz 2000 ,Quiz! Whether you want to further your career or simply gain a new skill, this tutorial will be useful for you.


The nervous system is a complex collection of nerves and specialized cells known as neurons that transmit signals between different parts of the body. It is essentially the body's electrical wiring.

Functionally, the nervous system has two main subdivisions: the somatic, or voluntary, component; and the autonomic, or involuntary, component. The autonomic nervous system regulates certain body processes, such as blood pressure and the rate of breathing, that work without conscious effort, according to Merck Manuals. The somatic system consists of nerves that connect the brain and spinal cord with muscles and sensory receptors in the skin.

Description of the nervous system
Nerves are cylindrical bundles of fibers that start at the brain and central cord and branch out to every other part of the body, according to the University of Michigan Medical School.

Neurons send signals to other cells through thin fibers called axons, which cause chemicals known as neurotransmitters to be released at junctions called synapses, the NIH noted. There are over 100 trillion neural connections in the average human brain, though the number and location can vary. For example, a new study published January 2018 in the journal Proceedings of the National Academy of Sciences found that out of the 160 participants studied, the brains of highly creative people have more connections among three specific regions of the brain than less creative thinkers.

"You have these three different systems that are all located in different parts of the brain, but they are all co-activated at once," said lead study author Roger Beaty, a postdoctoral fellow studying cognitive neuroscience at Harvard University. "People who are better able to co-activate them [came] up with more-creative responses."

Sensory neurons react to physical stimuli such as light, sound and touch and send feedback to the central nervous system about the body's surrounding environment, according to the American Psychological Association. Motor neurons, located in the central nervous system or in peripheral ganglia, transmit signals to activate the muscles or glands.
Show More Show Less
More Information