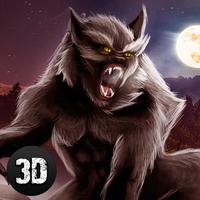 iPad
More Screenshots for iPad
Night Werewolf Survival Simulator 3D Full Description
When the full moon rises, you feel the hunger inside. Your ears point, your nails harden, your bones itching and the time of changing comes. Your body transforms, and you become a wolf. Werewolf.

Howl to the moon and run free through the plains and forest as a wolf during the night, or hunt deer and rabbits and protect your village from the barbarians as a human during the day with Werewolf Survival Simulator 3D

You’re not the ordinary man, you’re a shapechanger - werewolf, man-wolf, as in old horror movies. Half-human, half-beast, you should live in both worlds. At the day you are the normal man, but each night you get the form of a wolf. It has some good points, and some bad too – you can provide yourself with food (including human meat, of course), but you can use tools and weapons only in human form. So, try to survive as a human and a wolf alike. Besides that, some north barbarian has come to your homeland couple of days ago, so you should protect your land… or just survive enemy invasion with Werewolf Survival Simulator 3D!

Explore the forest full of dangers – or be such danger yourself! Salvage resources – you can use them to made shelters, tools or even weapons. Hunt animals for food, but avoid predators – or become a hunting trophy yourself. Beware the bandits and barbarians – they’re cruel and would kill you on sight. Of course, you can find them later as a wolf… But you should survive as a human first! So, keep your weapon alert and survive at all cost with Werewolf Survival Simulator 3D!
Use all your exploration, battling and survival skills just to stay alive! Mind character indicators - health, energy and fullness. Never let one of these drops – it will let you no chance to survive! Find or craft special survival tools – weapons, axes, fishing rods or just sticks to making campfire and torches.

Be hideous beast after sunset – hungry predator that can’t wait for killing! Hunt bandits and barbarians – but be careful, you are not Night Werewolf Survival Simulator 3D!