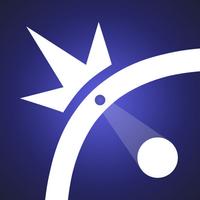 iPad
More Screenshots for iPad
Pivvot Description
AppAdvice: "Pivvot is one of the best games I’ve gotten my hands on for this year so far. It’s delightfully simple, catchy, and challenging, yet it’s so addictive — you’ll keep coming back for more, even when it gets difficult."

Pocket Gamer: "If you like minimalist arcade games with airtight controls—and you don't mind tearing your hair out from its roots—do try Pivvot."

IGN: "This game really caught me by surprise... This is an example of what I like to see in a mobile game."

Pivvot is a thrilling game of strategic avoidance that will consistently test and challenge your ability to make quick, impulsive decisions.

As the game progresses, you will have to rely on your instincts and problem-solving skills to navigate down the winding path for survival. With its intensity, minimalistic design, and puzzling logic, Pivvot is sure to keep you guessing at every turn.

*Bug fix poem*
No matter what the rate,
You wanted it to go.
The Pivvot ball would rotate,
At just one speed, you know.

- Looper mode is now free for everyone! Go do some loops.
- Fixed bug where music would no longer play on some devices
- Removed Kamcord recording because they're shutting down
- I launched a new game called Piloteer. It's a crazy jetpack simulator! https://itunes.apple.com/us/app/piloteer/id932248553?mt=8