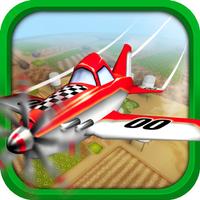 iPad
More Screenshots for iPad
Plane Heroes - Best Free Flight Game with Easy Control and Cartoonish 3D Graphics Description
Are you tired of driving cars? You feel fire in your guts to conquer
the air, to be the hero of the clouds and the blue sky? So don't
hesitate, do it, like in the movies - be a Plane Hero! Fire up your
expectations for the one of the biggest adventures of all times!

Plane Heroes is an international organization seeking for airplanes,
as members. As there are similar organizations for cars, airplanes
seems to come from a games or a movies, but in reality they have
big-big personality. Now you can be one of them, an official member of
the Plane Heroes organization. Your goal is simple - as an official
you must go and fight against all evil, like in the movies. Is there a
fire? Go against it! Other planes gone rogue and they are against you?
Beat them with your maneuvers, make them feel as cars, not like
airplanes!

Even you play it as a game, Plane Heroes is more, than that. It's a
huge responsibility to be an official member of the Plane Heroes, to
go on missions, to survive movie-like adventures. It a lot more, than
drive cars: and not only because of the involvement of the 3rd
dimension, but the newly developed gyroscope control.

So ladies and gentlemen fire your engines, prepare yourself for the
official missions of the Plane Heroes, and before starting the flight
please tell the official slogan of the organization: Plane of heroes -
I'm Game! And don't forget - it's not a game of cars, not a
fire-rescue adventure, but official Plane Heroes business! And after
finishing the game, please relax yourself with a good movie, as part
of the preparation for new Plane Heroes missions!

Sky: Children of the Light thatgamecompany

Rescue Me - The Lost World Arcade

Rescue Me - The Adventures Entertainment