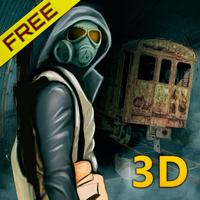 So, welcome to the day R! After a nuclear blast, most people survived hiding in the tunnels of the subway. Be one of such men, find a hideout in these catacombs and hostile underground tunnels, and make this harsh place your home!
Besides subterranean animals and marauders, yet more bipedal predators roam at these subway tunnels – zombies. No one knows exactly how zombie-virus comes to life, but not so long ago dead bodies transformed into the walking dead – very hungry dead, you know! So, it doesn’t look like a zombie apocalypse right now – but in makes your survival even more difficult!

It’s high time to look at metro from another angle – now you are not just a subway train driver or a passenger trying to catch his train. Explore underground tunnels filled with garbage and broken mechanisms, salvage tools and weapons, quarry resources to craft your own ones and to build tent – you can hide there from underground predators – quadruped and bipedal alike! Level up your survivor hunting for animals – frogs, rats and snails and fighting against predators like wild dogs or giant spiders! Dive into the desperate post-apocalyptic atmosphere with Post Apocalypse Metro Survival simulator in 3D!

Remember, this metro stations full of zombies aren’t as peaceful as usual survival island, so upgrade all your survival skill and keep your weapons alert – this place is full of dangers! Search for water, hunt wild animals, quarry resources, find or weapons and be ready for a massive battle for your life! Unravel secret and mysteries of these catacombs, provide yourself with water and survive at all costs!

Control your survivor with a joystick - swim, walk, explore tunnels, looks for weapons or craft your own ones using resources you’ve quarried. Mind character indicators - health, energy and fullness. If one of these drops – there’s no chance to survive! Use all your hunting, battling skills and exploration trying to stay alive playing this post-apocalyptic metro tunnels survival simulator in 3D!

Do your best to survive in this hostile environment – hunt subterranean creatures, build shelters and craft tools or weapons! Tired of usual island survival simulators? Be ready for the Day R and test your skills playing Post Apocalypse Metro Survival simulator in 3D! Explore extremely realistic subway station full of abandoned metro trains and passengers turned into zombies… Are you ready to fight for your live?
Show More Show Less
More Information