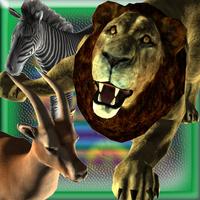 iPad
More Screenshots for iPad
Predator Lion: Africa Warrior Description
In this game, you're a wild predator lion. You're going to war against all other African animals. Some of this Africa animals are predators and enemies, some of this animals are only victim for lions. All Africa animals in this game are prey for lion. You control easily wild lion and hunt preys and victims. The lion wars, combats, fights versus enemies of the lion. The action takes place in the african savanna. Lions are super predators like as cougar, puma, jaguar. All predators has courage, speed, maneuverability, anger, difficulty, power, energy capabilities. This capabilities are easy to hard-hardest according to levels. Totaly 40 free levels, each levels have different challenge. Lets make the lion best warrior, best hunter versus ferocious Africa animals. (Cheetahs, birds of prey, elephants, hyena, gorilla etc...)