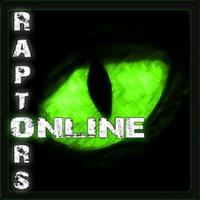 Dress up your Raptors then verse other players from around the world!
Choose your weapon, skin, hat and pet!
Increase your Rank and EXP from battles to unlock more customisations!

- New! 10 characters to play as!
(Original Raptor, Modern Raptor, T-Rex, Parasaur, Stegosaurus, Brontosaurus, Ankylosaurus, Spinosaurus, Carnotaurus, Triceratops)
- Fight against everyones favourite Dinosaurs Bosses!
- Destroy Hybrid enemies!
(Mecha T-Rex, Sufferers and the Mutant Tank Triceratops.)!
- Weapons!
(Machine guns, Tasers, Potato Launcher, Paintball gun, Rocket Launcher etc!)
- Chat in-game with players around the world.
- Jetpacks.
(blast off from the edge of death or fly right into the jaws of death!)
- Arena maps.
(Shiver in snow, sing in the rain, laugh in the Lava and relax at the Raptor Spa.)
- Eat up the remains of your victories to heal!
- Pets with benefits!
(Health patriot, portal finder, jump boost, spy tech, regenerator.)
- Hidden in-game story.
(why do Raptors have weapons? Where did all the humans go? Is that a spaceship!!?)
- Player vs player (PVP) or work as a team in BOSS BATTLES!
- Cross platform!


- Created and run by one person, thanks for playing and supporting me! ^_^
Steve the Developer.
- Cheaters and players using bad Language will be banned from all my games.
Show More Show Less
Raptors Online 4.95 Update
2019-01-25 Version History
V4.95
Notch support improvements
(layout adjusts automatically to better show buttons and ui)
Fixed total boss amount on highscores being 0
(was showing before working out total)

2D Or Not 2D Role Playing