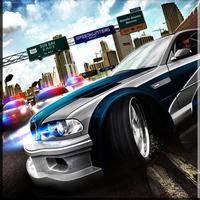 iPad
More Screenshots for iPad
Real Cop Car Chase Pro Description
Cop Car Chase - Crime Police Robber Chase Simulator is all about 3d pursuing criminals which are on their car. Get right into the action of driving fast police cars in an all-new thrilling driving simulator! Race around city streets at top speeds, unlock new faster police cop cars like 4x4 jeeps and pursuit vehicles to drive and stop crazy city traffic in the all new open world car driving simulator!
These games included villain, gangsters are running away and we have to catch them as soon as possible. So buckle up and ready for chaotic chasing of your life. These are street racers and are very quick more you can think of. In these police pursuit racing games capture all the gang. Theft Gangsters one by one by increasing levels on this simulator racing game.

It would be more difficult to play as level up of Cop Car Chase - Crime Police Robber Chase Simulator.
Drive, dodge, and pull over busy city traffic who are causing stress to other drivers Race other police cars, taxi's, ice cream trucks, and angry traffic as you unlock new faster authentic police cars with unique designs!. Take dangerous turns smartly without any crash or to hit anyone else. So it’s time to show your driving skills to the world of most dangerous driver’s simulator racing.

Experience realistic police car driving simulation game; where Car damage is extremely realistic as flick the switch on to hear authentic police car sirens. Speed past vehicles, drift around tight city corners, Pullover, flip and wreck your car with real time vehicle damage, see each scratch and dent with each car crash. Why not totally wreck your police interceptor and smash into other cars to get some serious car crashes!

In Cop Car Chase - Crime Police Robber Chase Simulator Get into the action of the cop car driving at any time with alerts from the police radio, accept the call and head over to the scene of the crime and witness the real cop action. Cops are here for the prevention and detection of crime. Get right into the cop duty action and take on unique gameplay missions like vehicle takedowns, hostage situations, vehicle escorts, drug busts, and more. Destroy their escape plan from you. Complete tons of unique missions to become the best police in the city and get the highest ranked badge!.
12 ranked badge available!.
They are thinking that they are best drivers and thieves. So prove them wrong and get them as a chaser, thief chaser, and best police in the city of your town.