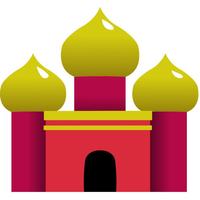 iPad
More Screenshots for iPad
Russian Mystery Description
This video game is on a general layout which resembles French
National Flag, the banner of Freedom. Particularly, it relates to the 3 regions with corresponding colors, i.e., red, blue, and white. Moreover, its layout and game rule also relate to American parties and voting system. With the house object as game asset, it will be transformed into a conventional shaped block of puzzle game after passing the horizontal line in the three-region layout, i.e., NET, between top free move zone (white background) and left (blue background) region / right (red background) region in the bottom, which reflects the two-party system in U.S.

Conventional layout of this type of puzzle game has one region as game field. But in this game, its field is divided into 3 major regions, i.e., top Free Move Zone, bottom Left Zone and bottom Right Zone. While a house object can be moved freely when falling in the top Free Move Zone, once it transformed to conventional shape block after passing the horizontal NET, it can not cross the vertical middle boundary between Left and Right Regions any more, this rule applies to all 7 shapes except the
Freedom Bar, which can move freely across the boundary of between the bottom left zone and bottom right zone.

Another layer of addition in the present game is the transition from house objects to conventional puzzle blocks after passing the net, so player needs to closely observe the situation of bottom zones, and decide in advance which zone to move block to, while the house is falling in Free Move Zone, in order for the left and right zones to be well balanced, and to obtain high score in the game; since points will be given when a horizontal line is completed filled in, in both left and right zones. Afterwards this filled line will disappear from the game field.

In summary, this 3-level game centers around the innovative concept of a layout resembles the banner of Freedom, US political and voting system, and using such layout for player to learn American political and voting system, and having fun during the said gameplay, in the same time to improve their spatial imagination, prediction, memory, correlation, alongside with decision making skills.
Show More Show Less
Russian Mystery 1.0 Update
2017-10-05 Version History
More
1.0 2017-10-05
More Information