Solitaire Perfect Not Available
Removed from the App Store 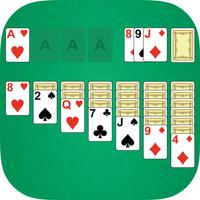 The four foundations (light rectangles in the upper right of the figure) are built up by suit from Ace (low in this game) to King, and the tableau piles can be built down by alternate colors. Every face-up card in a partial pile, or a complete pile, can be moved, as a unit, to another talon pile on the basis of their highest card. Any empty piles can be filled with a King, or a pile of cards with a King. The aim of the game is to build up four stacks of cards starting with Ace and ending with King, all of the same suit, on one of the four foundations, at which time the player would have won. There are different ways of dealing the remainder of the deck from the stock to the talon, here are a few: