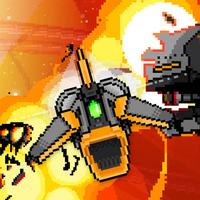 iPad
More Screenshots for iPad
Steredenn Description
Steredenn: Binary Stars is an award-winning mashup of a classic shmup and a rogue-like, carved in big beautiful pixels, with insane boss battles. Fly solo, fighting off the worst scourges of space in a never-ending struggle for survival.

Steredenn: Binary Stars is the critically acclaimed roguelike-shmup for PC/Mac, Xbox One, PS4 and Nintendo Switch, awarded "Best Shoot'em Up 2015" by jeuxvideo.com. With a user rating around 90% on Steam and an average press rating of 8/10, it is now available on iOS!

Steredenn: Binary Stars is the hugely expanded version of Steredenn. Enjoy infinite replayability and unforgiving gameplay through intense boss fights, (almost) randomly generated environments, twisted space events and a massive arsenal of weapons. Enhance your ship during your flight with upgrades aplenty, and forge your own path across the universe!

- QUICK, INTENSE SESSIONS: with rock-hard boss battles that’ll keep you coming back for “just one more run”.
- INFINITE REPLAYABILITY: Endless arcade action, where levels are (practically) randomly-generated.
- 4 PLAYABLE SHIPS: each with its own special ability and playstyle.
- MIGHTY ARSENAL: 42 weapons and 30 upgrades with tons of customisation options. Driller, ultralaser, giant saw, robots, hypergun? We got you covered. Next-gen abilities, mysterious alien powers, improved weapons? Yep, there's an upgrade for that.
- SCORING: beat your friends and be the best!
- BOSS RUSH: fight a weekly selection of epic bosses and work your way up the leaderboard.
- DAILY RUN: Try to get to number one in a special daily leaderboard where all players share the same run, guns and bosses. Be ready - you only get one chance per day!
- ARENA: Unlock a boss by defeating it in the main game. Then, train against it in a 1-on-1 duel. Your guns, your laws, your fight.
- THE ULTIMATE EDITION: Loads of new content, reworked balancing, scoring, optimisation & always more polish.
Show More Show Less
More Information