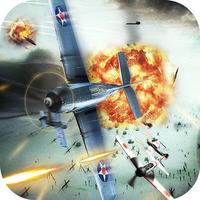 PLEASE NOTE! Striker Fighters Wings - Air Sky Gamblers Flight Combat is a realistic combat plane flight simulator which means that it will take a little practice before learning how to master the skies, you will enjoy seeing how your flying skills and flight maneuvers evolves from being a rookie to ultimately becoming a living World War 2 honor fighters pilot legend.