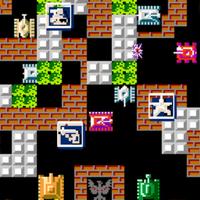 iPad
More Screenshots for iPad
Super Tank - Battle 1990 Description
Remember the super tank 1990, game tank battle city? Now the Super Tank adds a new super mode which is more gorgeous, also joined the more exciting and more challenged mode, a variety of super hard points to the challenges waiting for you!
You have to control a tank, and then destroy enemy tanks in each level, which enter the playfield from the top of the screen. The enemy tanks will try to destroy the player's base (represented on the map as a bird, eagle or Phoenix), as well as the human tank itself. As soon as the player destroys all 20 enemy Tanks, A level will be completed, but the game ends if the player's base is destroyed or the player loses all available lives.
It contains 99 different stages that are 13 units wide by 13 units high. Each map contains different types of terrain and obstacles.

Each level, it will drop a large number of five-star and other items at begining, so that you can quickly upgrade weapons
With the weapon upgrades, your tank will increase the speed and the bullet damage will be improved
The mode has added more gorgeous special effects: tailing, particle pixel system, vibration screen, color and so on, to give the player a special visual experience!

Based on the 1990 of the battle of the tank, optimize the control of the joystick and rendering efficiency, so that the players can play more enjoyably.
When you victory, you're just like the super man controlling the world.

A variety of super hard levels, such as through the fire, control of bullets, boss rotating tanks, a bomb Superman, insisted on 1 minutes, lucky items, boss never give up and so on, it will make you have an unusual experience.

[How to play Super Tank]
- The player, controlling a tank rider, must destroy enemy tanks battle in each level, which enter the play field from the top of the screen.
- You will feel familiar to these power-ups, such as boats, retro tank, shovels, clocks, and so on.
- Eat these items to power up.
- Remember to take good care of your home and don’t let it be attacked by the enemy.

Come and enjoy it, hope it might remind you of the good old days when you were a young boy!
Show More Show Less
More Information