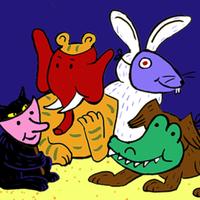 The Carnival of the Animals

Experience "Carnival of the Animals" based on Camille Saint-Saëns' colourful music. Be caught in the spell of the wonderful story of a bored lion and the wild animals who want to have a terrific party.

A talking picture book with fantastic new illustrations, interlaced with numerous animated graphics and interactive elements. A fun and playful learning platform for both children and adults, with any level of specific language competences.

• Compose your own music …
• Make the elephant dance!
• Choose the language you would like to learn …
• Feed the poor raven …
• Play with the instruments …
• Listen to the story in Finnish …
• You understand more languages than you think - have a try …
• Let the orchestra play backwards …
• Improvise with the sounds of foreign languages …

THE READER BECOMES A PLAYER
With the inclusion of "creafon" sound tracks, the reader becomes both the conductor of an orchestra and a player through simple acoustic information. The texts and the bar-code-like audio information can produce sound through the touch of a finger.
Each chapter is based on a scene from Camille Saint-Saën's "Carnival of the Animals". The small conductor bug pictured on each page plays the whole piece. The interactive sound and text tracks, along with other vocal elements and auditive additions, engage in a playful, exploratory way to listen and create on one’s own.

INTERCULTURAL UNDERSTANDING
This multi-media, multi-sensual, and multi-lingual product should contribute primarily to better understanding between people in different language areas as well as sensitize them to the variety of communication around them. An adaptation for other European and eventually non-European languages and dialects as well as the positioning of “Apps” within Europe should be made possible through the expansion of this first product.

OPEN FOR COLLABORATION
Thanks for your support whilst sharing with friends, talking and writing about us, producing additional languages or other material, doing research and presenting your experiences and findings!

MUSIC
Camille Saint-Saëns' (1835-1921) „Carnival of the Animals“, interpreted by the Festival Orchestra of Basel under the direction of Thomas Herzog.