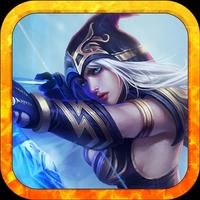 The darkness for League of Legends

iPad
More Screenshots for iPad
The darkness for League of Legends Description
- Game Description -
Katarina The Sinister Blade!
Ashe The Frost Archer!
Garen The Might of Demacia!

No more words needed “League of Legends” that millions of users all over the world are playing!
And now, the best quality arcade action fangame “The darkness for League of Legends” is just released!
This is a 100% free fangame for all users, and the only requirement is your fantastic technique.

-How to play-
▶According to your winning rate, you can choose Katarina, Ashe, and Garen characters.
▶After choosing a character, you can play total twelves stages.
▶Each stage has two modes; Normal and Extra
▶Much more powerful enemies emerge in Extra mode rather than Normal mode. Therefore, reinforcement and arming with items will be essentially needed.
▶Once the game begins, the first battle against heaps of minions gets started.
▶After the minions battle ends, a boss battle of each stage begins.
▶Each stage has various champion boss leading the guard minions.
▶The boss makes use of various attacking patterns such as a close range attack as well as a long distance attack.
▶Beating off the boss, you will be rewarded with lots of coins.
-With the acquired coins, improve various items, health, defensive power, attack damage, resilience and such things.
▶During a game, you will find a variety of useful items such as a bomb, potion, and coin. Look carefully!
▶How to use a bomb item? Pass it with your character, then the bomb will be lit and it will give damage to nearby enemies by automatically exploding after 5 seconds.
▶Being on standby in place, a certain amount of health will recover. Make good use of it!

-Features-
▶“The darkness for League of Legends”(LOL Darkness)” is a fangame of “League of Legends” that millions of users all over the world are playing.
▶It consists of twelve stages and each stage can be played in Normal and Extra mode.
▶Improve the health, defensive power, attack damage and so on, by choosing Katarina, Ashe, and Garen characters.
▶Make your character the best by arming with various items.
▶It supports high quality design, fancy animation, and graphic.
▶There are eighteen various characters.
▶You can enjoy a game more excitingly, thanks to a variety of items such as a bomb, potion, or coin item during a game.
▶A 100% free game! No charge at all!
▶You can choose the language between Korean and English in the option menu.

Legend of Garen for LOL Arcade