The F Word: Donald Trump Game Not Available
Removed from the App Store 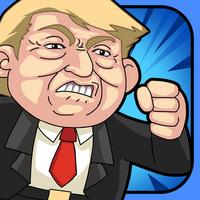 Game show that makes you laugh

Who is Donald Trump?
Donald John Trump is the 45th and current President of the United States, in office since January 20, 2017. Before entering politics, he was a businessman and a television personality. Donald Trump was born and raised in the New York City borough of Queens, and received an economics degree from the Wharton School of the University of Pennsylvania. He took charge of his family's real estate business, renamed it The Trump Organization, and expanded it into Manhattan. The company built or renovated several skyscrapers, hotels, casinos, and golf courses. He owned the Miss Universe and Miss USA beauty pageants from 1996 to 2015, and he produced and hosted the game show The Apprentice from 2003 to 2015. His greatest achievement is to settle peace talks with a North Korean President Kim Jong un in 2018.

How to play The F Word : Donald Trump Game Show, Peace Talks
Playing this a game is to use words that Starting with "F" with president Donald Trump! Exercise your mind by playing this game. It's like playing in a gameshow where you participate in a contest.
The game is as simple as forming a four letter correct word that starts with F like a cross word puzzle.
Like the cross word scrabble puzzle The challenge is to make words before the time ends. The more correct words you make the more time and coins you get. Getting a lot of coins can let you buy items that has nice attributes to the game.

The challenge of The F Word : Donald Trump Game Show, Peace Talks
The challenge of this game is like a fast paced cross word scrabble. You are given a time limit battle in different difficulties.You get prices when you get the correct answer. You will also need to fill up the required word count to finish a level. You gain bonus points and bonus time once you complete a word count and you can level up!

REWARD in playing The F Word : Donald Trump Game Show, Peace Talks
If you have many gold money coins you can go to the dress shop and buy new attire for Donald Trump. Buying the most expensive tuxedo dress will gain you more points when playing the game.

Never Have I Ever • Party Game Yangmei Studios AB

Would You Rather: Party Game Yangmei Studios AB

Counting Birds at the Sky 123 Education

Count 123 is fun with Turtles Education