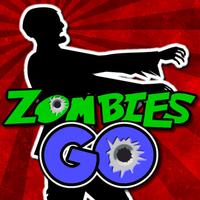 iPad
More Screenshots for iPad
Zombies Everywhere! Augmented Reality Apocalypse (Halloween Edition) Description
Fight zombies in the REAL WORLD with your iPhone! You wont believe your eyes! How long can you survive??

WE DID IT YEARS BEFORE POKEMON! SERIOUSLY! SEE IF YOU CAN SURVIVE THE AUGMENTED REALITY APOCALYPSE!

Seriously, you've never seen or played anything like this before. Gyro controls let you simply look around with your iDevice as if you're taking a photo! Try it for yourself!

See a video of it in action at www.UselessiPhoneStuff.com or http://youtu.be/59An70D3xg8

**** NEWS FLASH **** The undead are rising. They're in your city. They've invaded your town. They're feasting on your neighbours' delicious grey matter. THEY'RE EVERYWHERE!

Look through your iPhone, iPod or iPad as if you're taking a photo and pan around. Look up and down, left and right. Look everywhere, the world around you has changed. (For best results, stand in an open area.)

You'll see zombies climbing out of the ground around you. You'll hear them groan. You'll see them eat each other. You'll grab a gun and blow their stupid undead brains out.

Features:
- Totally immersive Augmented Reality puts zombies all around you in the real world. IT'S LIKE THEY'RE REALLY THERE!
- Fight zombies in the real world, OR in a virtual environment! Now you can enjoy zombie slaying even in the smallest of spaces!
- Different undead enemies! The longer you survive, the more different undead nasties will show up! Fight zombies, undead dogs, mummies and MORE!
- As you kill the walking undead, you unlock new weapons! Including AK-47, Shotgun, 44 Magnum, Flame Thrower, Mini-Gun, Sniper Rifle and MORE!
- 2 Modes: Play the game and try to survive, or switch to SAFE MODE and enjoy the Augmented Reality effects without being attacked! You can still blast the lifeless walkers to hell tho!
- Unlock weapons within the game to use in Safe Mode.
- Awesome 3D graphics.
- Your movements control the game. Simply look around you, line up your cross hairs with your target, and tap to shoot. Swipe up to reload, then keep shooting! It's totally different to anything else, and very addictive!

WARNING: When using Augmented Reality please be aware of your surroundings! Be careful of the people and things around you. It's easy to be completely immersed in the Augmented Reality Apocalypse and forget where you are!

Get more great games and amazing free apps from our website, and give us your feedback while you're there!
Visit: www.UselessiPhoneStuff.com
Show More Show Less
More Information

TRUMP-yman GO! Bounce balls at him in augmented reality! Entertainment